The Prehistory of the DAMMERR

My climbing partner and I were in the habit of putting up new routes and since most Sierra
routes have slabby bits, we were drilling quite a few holes for lead protection, belays and
rappel stations. I have never used a power drill on a climb and don't intend to so we spent
many an hour pounding away at hand drills. This is long, tedious, hard work and we often
focused on how quickly we could get a bolt in. 10 minutes per bolt isn't uncommon and
since a 200 foot pitch might involve 10 lead bolts and two belay bolts you have plenty of
time to think about it.

I have tried to research the ergonomic efficiency of hammering but besides a few goofy
studies looking at bent handles, there is nothing. I found this surprising since a hammer
is no doubt the oldest and certainly the most fundamental of human tools. Since I fancy
myself somewhat of an experimentalist, I decided to experiment with hammers and see
what made the best hammer for hand drilling 3/8” bolt holes in granitic rock.

Most of the hammers marketed to rock climbers are really piton hammers. These are
designed and intended for climbers but their primary purpose is driving pitons rather
than drilling. Driving a piton is a very different activity in comparison to drilling. If
somebody pounds for 10 minutes on a piton, they have probably lost their grasp on reality.
The best piton hammer is probably the heaviest hammer you can swing balanced against
the weight you want to carry up a climb. I don't often use pitons and it is such a rare event
that I can make pretty much any hammer do piton service. I wanted a drilling hammer that
can pound pitons when needed not a piton hammer that can drill the occasional bolt.

I started collecting hammers. I mostly collected piton hammers but I also gathered a few
others that interested me. I also acquired a large block of very good granite.

I began drilling holes in my granite block with the various hammers keeping track of how
fast each try went. I tried to keep the drill holders and drill bits as consistent as I could
and rested between tests so I wasn't tired.

I found that weight was the primary factor. I quickly demonstrated that I could swing a
light hammer for a very long time without a break but the hole didn't progress very quickly.
I also found that I simply could not continuously swing a heavy hammer long enough to
finish a hole. There was a mid-weight hammer that seemed to work best for me which was
about 24 or 25 ounces total weight. Most published hammer weights are the head only and
this equates to about 16 to 17 ounces for the head which is about the most common
hammer size, which makes sense. 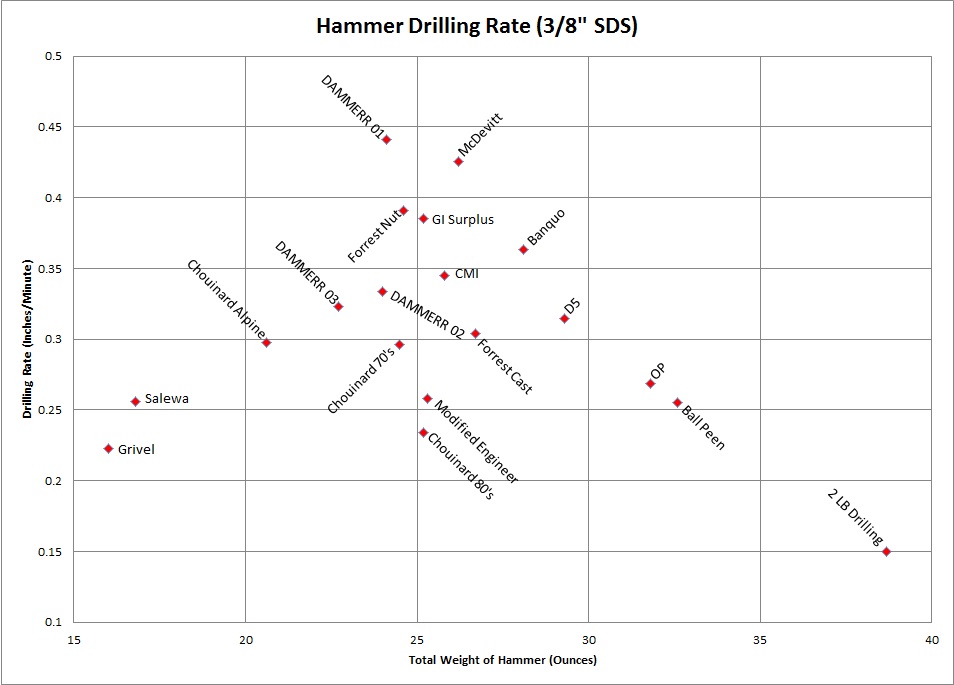 I also found that the length of the hammer made a detectable difference and determined
that longer handles generally worked better for drilling in the lab but a long hammer isn't
a good thing on the rock since it gets in the way when being carried and sometimes there
isn't room on the rock to manipulate and swing a long hammer. An overall length of 12 to
14 inches is probably a good comprise.

Hardness of the head is also a significant factor. Too hard and the steel will chip and I think
the head will bounce too much not transferring enough energy to the drill. Too soft and the
head deforms into a big mushroom and too much of the energy is lost in deforming the
steel rather than advancing the drill bit. I think a Rockwell C hardness of about 48 is best.
Perhaps a little bit harder.

Some of the hammers tested